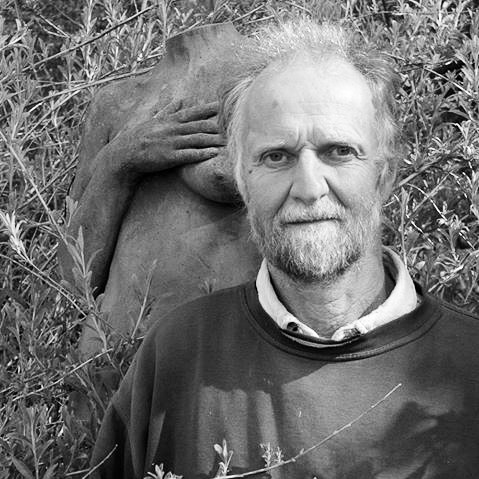 Ian established the Irish Natural Forestry Foundation in order to campaign to influence Irish forestry policy, to demonstrate a sustainable means of utilizing afforestation grants and to build strong working partnerships with organisations on various levels such as GreenBelt, COFORD, LEADER, Kinsale College of Further Education, UCC, Discover Primary Science and European Universities amongst others.

Ian is an accomplished sculptor, landscape architect and environmentalist.

He attended Hornsey and Royal College of Art where he claims to have ‘failed with distinction’ before moving to Ireland in 1974. He had a longstanding interest in forestry and developed his own smallholding (13 acres) as a conservation area.

Up until 1994 Ian produced limited edition ceramics with his partner Lynn trading as ‘Cors Its Ceramics’. Concentrating on “crazy” bathroom pieces and selling to Europe, Australia and USA.  His work can be found in many private and public collections. Since 1994, Ian has been producing one off sculptures in cement fondue.

Ian worked on an environmental research project in the Indian Ocean, helping to run and maintain 42’ ketch taking scientists to sites along East African coast and islands as far east as Madagascar.

Ian researched, developed and introduced the building of low–tech ferro–cement boats as a cottage industry on Lake Malawi to help address the problem of unsustainable fishing practices.

He also sourced the artifacts for Self Help’s “Value of Rubbish” exhibition, using the resourcefulness of African People to instigate a debate and educational projects concerning the West’s attitude to rubbish. This exhibition toured Ireland and was developed into an educational project with EU funding.

In 1997 he purchased 70 acres intending to develop an environmentally and economically sustainable forest using existing grants. He successfully challenged the decision of the Forest Service (through the EU) to only grant aid the planting of alien conifers.

In 2002, Ian became co–editor of the Forest Network Newsletter and held the position until 2008. FNN dealt in depth with current forestry issues from the environmental perspective. During this year he also presented a paper at a COFORD seminar on ‘Opportunities for enhancement of biodiversity in plantation forests’, had articles published in many papers including the Farmers Journal as well as meeting with EU commission on three occasions to discuss Ireland’s forestry policies and abuses of EU funding.

Between 2005 and 2010, Ian worked in conjunction with Greenbelt and private landowners to plant approx 1.5 million trees.

Ian also designs and creates lakes and wetland habitats and planting for biodiversity for private clients.

Has worked in an advisory capacity for: